“A blind man works on wood the same way as a surgeon on the body when he is ignorant of anatomy.”
–Chirurgia Magna, Treatise I, Doctrine I, Ch I

Every surgeon knows the importance of anatomy. It is impossible to navigate through the human body without having an accurate roadmap. Until the Renaissance, the knowledge of human anatomy was derived from animal dissections, mainly done by Galen in the 2nd century AD. Galen’s chronicle of human anatomy was considered immutable as the Bible for almost 1300 years. No one dared to challenge his teachings, which obviously had errors as they were based on animal dissection.

Renaissance ushered in the age of enlightenment. Ancients were challenged, and dogmas were questioned. Andreas Vesalius, an anatomist and a physician in 16th century Europe was one such scholar to question Galenic teachings on human anatomy. He popularized human dissections and derived his knowledge from first-hand direct inspection. At the age of 28, in 1543, he published a landmark book called the De humani corporis fabrica (On the Fabric of the Human Body). The book corrected over 200 anatomical inaccuracies in Galenic texts.

“The Fabrica,” as it is commonly known, was not only the first accurate atlas of human anatomy, it is also considered a work of art with beautiful, high-quality illustrations. The drawings of cadavers and skeletons were in dramatic allegorical postures as one can see in other Renaissance paintings of that age. The picture on the left of a skeleton mulling on over its mortality is particularly remarkable. The skeleton on the right appears to be sad and is sobbing. 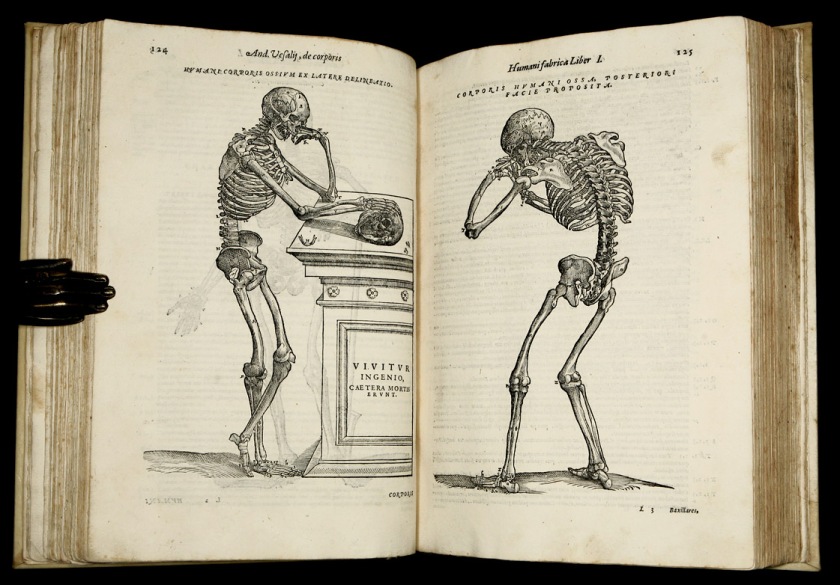 Why is “The Fabrica” such a landmark publication in the history of science? Know more about it in this video by Sachiko Kusukawa, a historian at Trinity College, Cambridge.

The Art of the Original Fabrica, by Sachiko Kusukawa

A Book & A Phenomenon, by Sachiko Kusukawa

Sample pages from the New Fabrica, translated from the original Latin text: